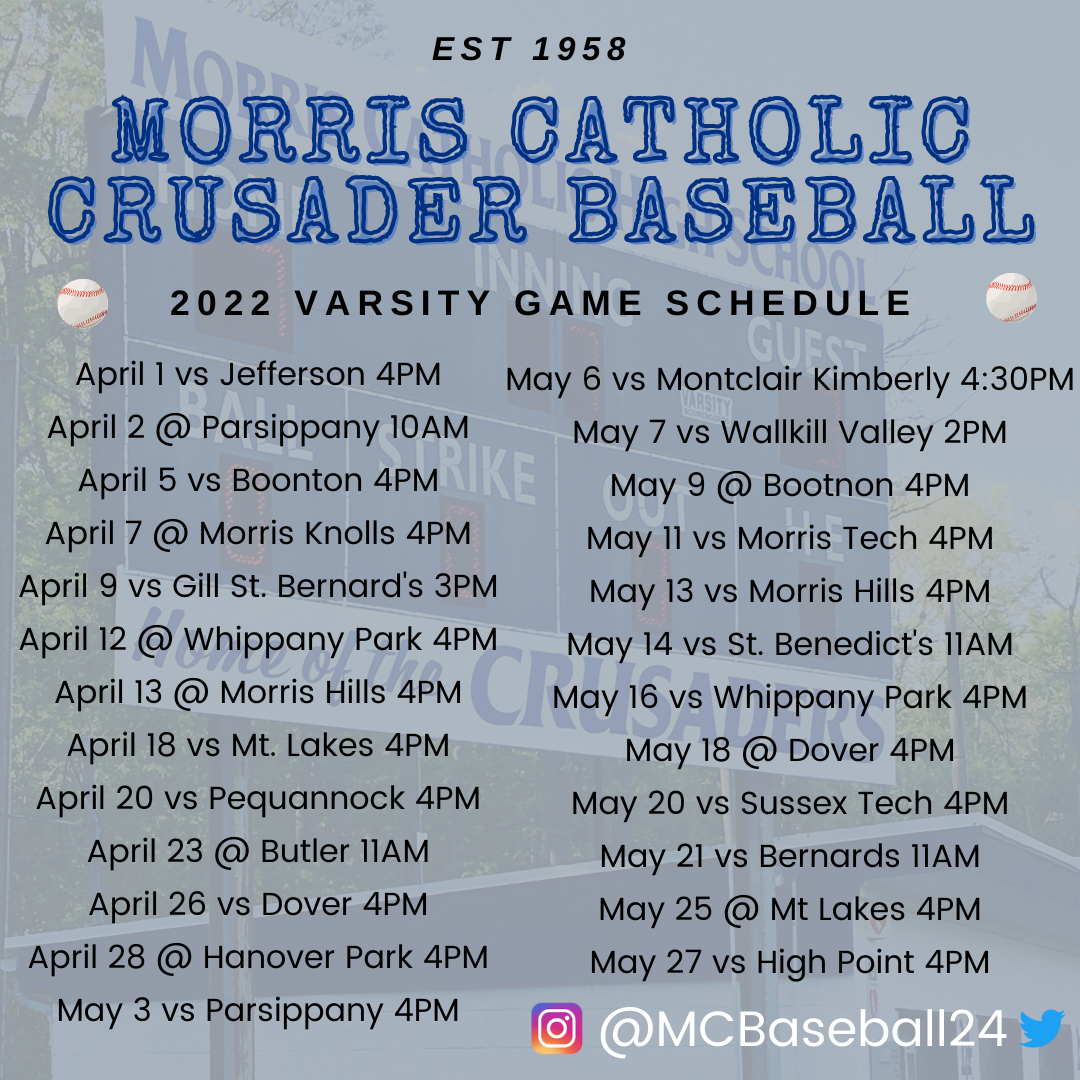 About the Team
Baseball has always been known as “America’s Pastime.” It is a relatable game to so many and the history and experiences of the game are passed down through the family. It is a game inches and details. There are games within the game such as the pitcher against the hitter, baserunners against fielders, and more. It is a game of life. In life you will have ups and down, or streaks and slumps as we know them. How you deal with those times can make you a stronger, better person in the long run.
At Morris Catholic, we strive to teach the skills of life and the skills of the game the right way. We want our student-athletes to strive to become the best players they can be and contribute in their roles to the success of the team. Off the field, the Varsity team takes a Spring Training trip to Florida during the preseason in order to practice and play a few scrimmages in the warmer weather. This trip is essential not only for the baseball experience, but the team building that goes on during the trip. Like other MC sports, the boys play in the Northwest Jersey Athletic Conference in the Independence Division and are part of the North Non-Public B State Section. The first and only Group State Championship was won in 1971. In 2013, the team won its first State Sectional Championship since 1979. Over the past few seasons, the Crusaders have competed well at the state, county, and conference levels. They have won two NJAC Independence Division championships or co-championships.
We are very lucky to play our home games at one of the best facilities for high school sports. Our all-turf field allows us maximum time to practice and play. Two all-turf bullpen mounds and a batting cage enable us to get extra reps in and utilize our practice time to its fullest extent. Both teams have full dugouts and a brilliant new sound system will be installed for the 2021 season thanks to generous donations. In addition, donations have enabled us to have a deep bench of equipment to use to better our athletes including a Pocket Radar, Diamond Kinetics Pitching and Hitting tools, and a pro-model Hack Attack Pitching Machine.
In 2017, MC Baseball lost to Newark Academy in the Sectional Semi-Final after defeating the 8 seed DePaul and the top seeded St. Anthony. 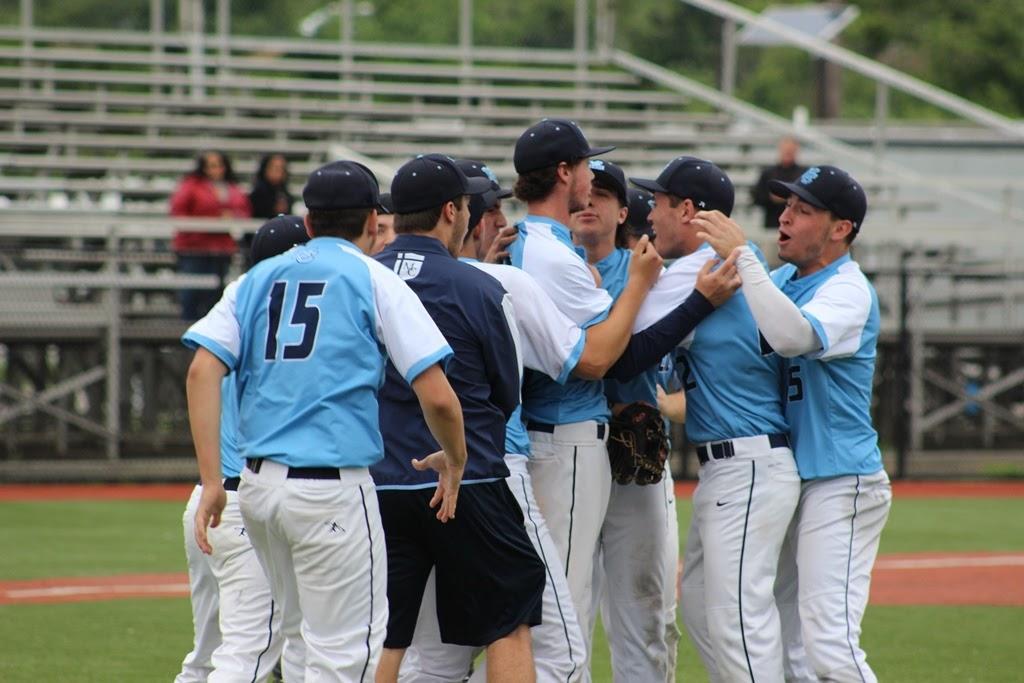 They finished the season 12-14 overall with a 5-5 record in conference. During the 2017 season, Chris Marquart recorded his 100th career hit.
In 2018, MC Baseball was the 11th seed in the 1st Round of the North Non Public B State Tournament and defeated the 6th seed Newark Academy in extra innings. They finished with a final record of 10-14 overall with a 5-5 record in conference.  While pitching against Butler during the 2018 season, Stephen Scevoli recorded his 100th career strikeout.
The Crusaders' state tournament successes continued in 2019. Once again as the 11th seed, they defeated the 6th seed Eastern Christian on the road. After a loss to the 3rd seed Gil St Bernard's, their season finished at 11-15. During the season, senior Josh Clark recorded his 100th career strikeout against Mt. Lakes.
After the cancelled 2020 spring season, the Crusaders came back with a solid 2021 campaign which saw success built on the foundation of previous Crusader Baseball classes. MC hosted a Morris County Tournament game for the first time since 2016 and, as the #9 seed, defeated Morris Hills 5-1. Another strong showing in North Non-Public B State Tournament followed the regular season. The Crusaders entered the tournament as the #9 seed and defeated the #8 seed Montclair Kimberly Academy followed by upset of the #1 seed Gill St. Bernard's. The season came to an vs #5 seed DePaul but the team still finished with an overall record of 14-9.
Have questions or want more information about our baseball program? E-mail Coach Berg at [email protected] 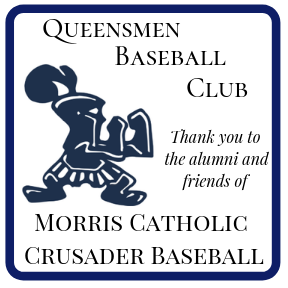 The Queensmen Baseball Club exists to embrace the past, enhance the present, and promote the future of the Morris Catholic Baseball program.  The Club will build a community of those who have been a part of the MC Baseball Program in the past, enhance the experiences of the current Student Athletes through financial and networking means, and promote the message of Crusader Baseball to future MC students and parents to help grow the program.

Entering his 12th season with the baseball program, Coach Berg was named the Head Coach prior to the 2017 season. During his baseball coaching career at Morris Catholic, he has served as the JV coach and an assistant varsity coach under the previous two head coaches. In 2013, he was part of the coaching staff which led the MC baseball team to their first State Sectional Championship since 1979. He played and served as team captain for multiple sports at Morris Catholic from 2001- 2005- as a first baseman and outfielder in baseball and also a member of the Cross Country and Basketball teams. He believes in the development of the whole student-athlete- in the classroom, on the field, and in life development as young adults. He holds a Bachelor of Mechanical Engineering degree from The Catholic University of America in Washington, DC (2009) and a Master of Business Administration from Florida Institute of Technology (2012). Coach Berg works as a Mechanical Engineer at the Armaments Center, at Picatinny Arsenal. He and his wife are both Morris Catholic graduates and reside in Allamuchy Township.
John O'Dell: Assistant Varsity Coach, Pitching Coach
This is Coach O'Dell's 2nd tenure in the Morris Catholic Baseball Program. From 2001-2003, he served as the MC JV Head baseball coach and then was promoted to Associate Varsity Head Coach from 2003-2006. He then left to coach his son on many Little League All Star teams and Post #390 American Legion Teams. His 2010 15U American Legion team went 20-2, losing in the NJ Legion State Championship. Coach O'Dell pitched for Morris Knolls HS Varsity baseball for 3 years and went on to play college baseball at CCM and Montclair State College. He also pitched in the Met League (Verona A's) and Morris County Majors (Montville Shamrocks). John has also been a Varsity Assistant hockey coach at Morris Knolls since 2013. He is a lifelong Denville resident and works for the Denville Police Department. He lives close to campus with his wife Sheila, son Johnny (Providence '18) and daughter Erin (Kean '18).
Jordan Medley: Assistant Varsity Coach
Coach Jordan has been working with the baseball program since 2018. During his high school years, he attended the Linsly School in Wheeling, WV where he was a four year starter and multi-time OVAC All-Conference player. From there, he went on to play at Wheeling Jesuit University where he started all four years and was selected to multiple WVIAC All-Conference teams while serving as team captain.  After his college playing career, he has coached at Wayne Valley HS and is currently the Director of College Recruitment at Prospects Baseball Academy. He specializes in coaching hitting and outfield defensive play. Outside of baseball, Coach Jordan teaches Social Studies at George Washington Middle School in Wayne.
James Wickenheisser: Assistant Coach
Interesting in learning more about Morris Catholic?
Visit our Admissions Page or contact Coach Berg for more information!
Coaching Staff
Mr. Nick Berg
Baseball Head Coach
[email protected]
Mr. John O'Dell
Varsity Pitching Coach
[email protected]
Mr. Jordan Medley
Assistant Coach
[email protected]
Mr. James Wickenheisser
Assistant Coach
[email protected]