2020 FALL DRAMA AUDITION INFORMATION
If you are interested in auditioning for this year's fall drama, Three Sisters, please read the attached packet. Auditions will be completed by video, please read the directions on the first page of the packet.  Auditions are due by Tuesday, September 1 at 8:00 AM. Late submissions will not be considered.
Also, please complete the following required audition form at the following link:
https://docs.google.com/forms/d/1wmzEaxC-CRjOKgz8MnomwZ_KaDiTeZ0kYySrDNlG47o/viewform?edit_requested=true 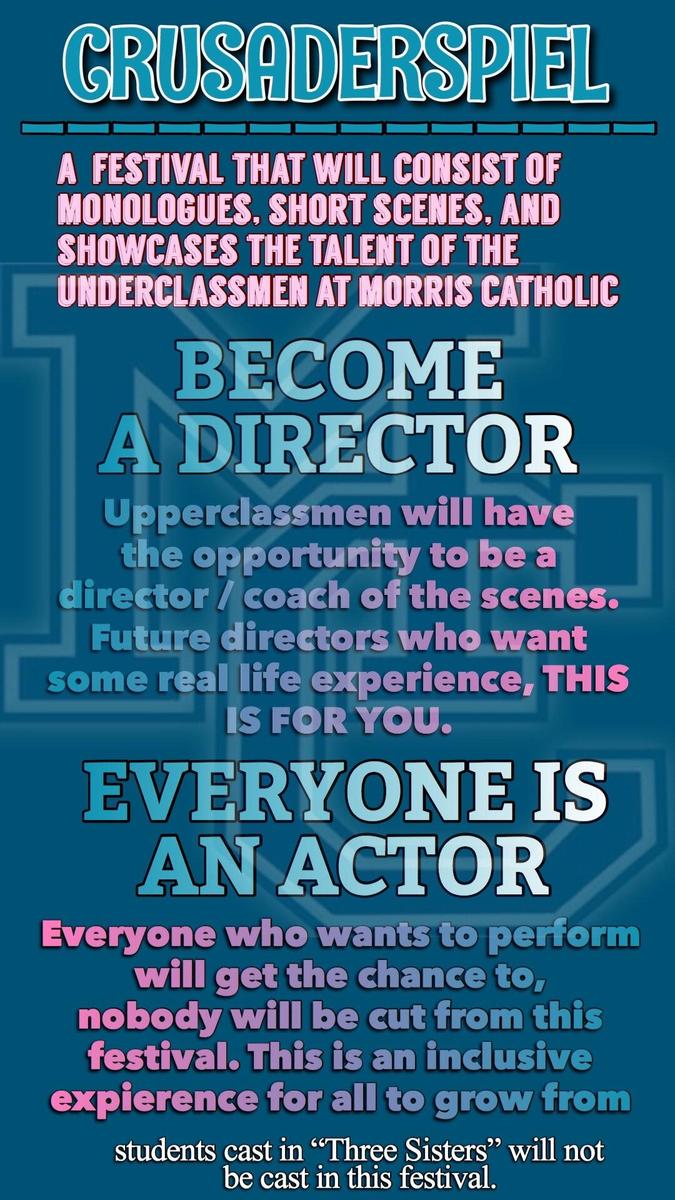 Join us in our first ever CRUSADERSPIEL! The Crusaderspiel is a festival that will consist of monologues and short scenes that will showcase the talent of the underclassmen at Morris Catholic! Upperclassmen will have the opportunity to become a director/coach of the scenes performed by our underclassmen. For all of our future directors or for upperclassmen who want to see what directing is like, this is your opportunity to shine! Everyone who seeks to perform in the Crusaderspiel festival will have the opportunity to. No one will be cut from this amazing experience. (Students cast in “Three Sisters” will not be cast in this festival). Please fill out the form attached if you are interested!
https://docs.google.com/forms/d/e/1FAIpQLSfANTTMEaqJuswoYAusGW9EoWMfVz2oKpGAqscz1yqAzNCHxQ/viewform

The Performing Arts Program is a dynamic and engaging program that reaches out to all students who wish to grow as actors performers, theatre technicians, directors, playwrights and dancers. Whether you have been acting all of your life, or are just getting started you will find your voice at Morris Catholic.

In addition to the Theatre Studies courses listed on the main arts page, we also offer several performing arts opportunities per year:

Spring Musical: large-scale production, featuring close to 100 students every year in the cast, crew and orchestra. Rehearsal goes from January until May, when the show is performed. All are welcome, and no one is cut from the production. Past productions include: 42nd Street, Big Fish, Footloose, Ragtime, The Civil War, Titanic, Les Miserables, Fame, Godspell.

Fall Production: audition-based production, featuring some of the strongest acting talents in the school. This year’s production, Little Women features the largest cast of 50 students. Previous productions include: Radium Girls, It's a Wonderful Life, Inherit the Wind, You Can't Take it With You, Little Women, A Midsummer Night’s Dream, Twelfth Night, The Diary of Anne Frank, The Crucible, Our Town.

Winter One-Act: an hour-long one-act play written by upper-level Theatre Studies 3 and 4 Honors students, and performed by new talent in the freshmen and sophomore classes.

The Performing Arts students compete annually in the New Jersey Thespian Festival in numerous dramatic, comedic and musical performance categories. We also have the Drama Club, which has bi-weekly meetings and once a month Coffeehouse nights, where students perform and play theatre games in the KPAC. Distinguished theatre students will also be inducted into the Thespian National Honor Society.