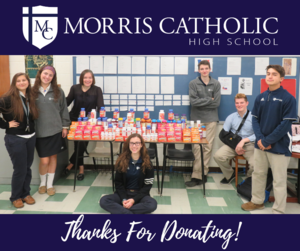 Sponsored by The French Honor Society
The French Honor Society would like to thank all within the Morris Catholic community who helped to make the Haiti Mission Vitamin Drive a success this year. Your donations total 332 bottles of vitamins, which are already on their way to the Missionaries of the Poor in Cap-Haitien, Haiti. MERCI TOUT LE MONDE!!
More About the Cause:
The Missionaries of the Poor (MOP) are a Catholic congregation of brothers dedicated to "Joyful Service with Christ Crucified" who serve the poor in their Monastic Communities.  They were founded by Fr. Richard Ho Lung in 1981 who received a call from the Lord while a professor at Boston College.  Over 500 Brothers serve in countries around the world including Jamaica, Haiti, India, Indonesia, Kenya, Philippines, Uganda and the USA.  In Haiti, they have two missions: Good Shepherd in Cap Haitien and Saint Joseph in Port au Prince.  Our donated vitamins will be hand delivered to the Good Shepherd Mission in Cap Haitien by a group of volunteers from Morris area parishes led by Mr. Steve Gebhardt.  The Good Shepherd’s Apostolate includes an elderly home, called the ‘Asile’, for 150 aging men and women, an orphanage for 30 disabled children called ‘Bethleem House’, an orphanage for healthy children called ‘Nazareth’, and an AIDS center called ‘Saint Joseph House’.  Approximately 15 brothers serve at the Mission daily, caring for the residents, living in community life and praying throughout the day and night.
Print