Are You Ready to Vote? 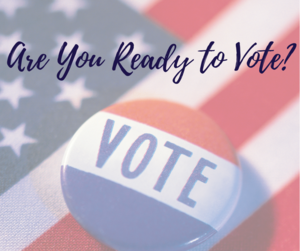 The midterm elections after a president is elected to office are crucial to the ruling party’s success on the federal and local level. In the recent, highly controversial victories for Republicans in the form of governorships and seats in Congress, the Presidency, and multiple seismic victories on the Supreme Court, Democrats have proven themselves to have much ground to gain. If they can secure a majority in the House and/or Senate, it will likely serve to stimy President Trump’s agenda, forcing the Republican party to either make legislative concessions and compromises, or attempt to ram through unpopular policy alongside executive orders.

In some ways, the last two years of unprecedented political activity in this country are unsurprising to the trained eye. While Donald Trump in particular was a wildcard as the Republican nominee and eventual victor, the subsequent trail of victories his party received are representative of a familiar phenomenon for political scientists. A constituency that is active enough to elect a president often allows others in the party to ride “on the coattails” of his or her victory. Likewise, Neil Gorsuch’s seat on the Court would most likely go to Republicans, as they’d been stalling with the reassignment of Justice Scalia’s seat. Students of government also put faith in the “surge and decline” theory, which states that in the midterms after a presidential election, the ruling party’s zealots will feel secure and underperform at the ballot, while the party that lost the presidency will have their teeth bared and voices heard during voting season.


Radicalism Is in the Air

What is certain is that these midterm elections will be consequential for two parties that have been more zealous and mobile than usual. Republicans have aligned themselves with a somewhat un-Republican figure to achieve victory, while Democrats have split themselves into more aggressive factions that are alienating some of their constituency while empowering newer movements, all of which are drawn together by a common enemy. Radicalism is in the air, but if it will truly manifest from either side is up for debate.

The tool below serves as an election demystification chart. Because local elections in the U.S. are so decentralized, the number of local candidates on your particular ballot will vary depending on your town, county, etc. Every student eligible to vote is strongly advised to research their local candidates. At the bottom of the page are a few links to get started, as well as a video by former president Barack Obama which paraphrases why being politically active is a civic duty that is pertinent to young people. In theory, living in a free and open democracy means that each and every one of us has an obligation to vote for the candidates that we believe will make our communities better places to inhabit, and shift the world in a more constructive direction. This notable power should be wielded with responsibility and efficacy, which can only be achieved by an informationally savvy voting population in the aggregate. Please help contribute to that virtuous cause by learning about the candidates before you vote.

The House of Representatives is a federal body composed of 435 individuals, elected from their home state to serve the needs of a district within it. New Jersey is composed of 12 Congressional districts, with 7 Democratic and 5 Republican members of Congress. Most students from Morris Catholic are located in district 11, so that’s the district this chart of values will represent. Check out which district your town is in and the candidates before you vote, regardless. NOTE: This chart only gives the personal beliefs of the candidates, not necessarily their pasts. Candidates often have notable attributes that would sway a voter, such as Mikie Sherrill’s military service or Bob Hugin’s position as an executive for a pharmaceutical company. If you’re dead-set on a candidate, research that information.

The other legislative body of the federal government is The Senate,  which with The House of Representatives comprises Congress. However, the two positions differ in fascinating ways that intentionally impact how the nation runs. Firstly, there are only two per state. This empowers less populated states as they battle for the interests of their constituency, putting them on equal footing in terms of representation. Also, Senators are elected for six years as opposed to two. This enables them to focus on long-term projects that House members might not be able to. Currently, one NJ Senate seat is up for grabs.

This race is actually fairly tight. In what is perceived as solidly Democratic New Jersey, the Senate seat is wavering more than usual. This fact has made national headlines, and is following a general trend across the nation, such as Beta O’ Rourke’s catching up to Ted Cruz in the pivotal Texas Senate seat. The savvy voter should be asking why these demographic shifts occur in the first place. Often, recent news can have seismic impacts on seemingly unrelated races, such as the Bret Cavanaugh hearings, recent celebrity and politician pipe bombings, 14th Amendment comments by the President, and the Pittsburgh synagogue attacks.

*several of the last ones are ripped directly from the Bobs’ websites.