MC Junior a Journalist for Auction and Collection Monthly Magazine 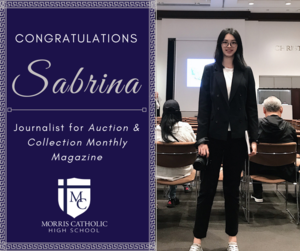 Suxin (Sabrina) Liang, a junior at MC is an extraordinary student on many levels.  Traveling halfway around the globe from China to spend her high school years in Morris Catholic would be intimidating to even the most serious of students, but Sabrina takes it all in stride. Sabrina, who is hoping to attend NYU and pursue a future in art management, has spent the last three years working hard on her studies and honing her art skills, which apparently has paid off. She has been invited to become a journalist for Auction & Collection Monthly Magazine, published by Guangdong Education Publishing House - quite an honor for someone so young.

Sabrina has had several articles published, one debuting the infamous New York Armory Show, which also introduced the new Director of Exhibition, Nicole Berry, and several emerging artists and most recently, one regarding Christie’s and Sotheby’s Asian Art Week Auction. In covering the Auction, considered the “collector’s season”, Sabrina had an opportunity to view a countless number of high-quality vases from the Neolithic periods to the Qing Dynasty. Other artifacts on display such as jade carvings, bronze works, and statues and more, were key in helping her put thoughts to paper.