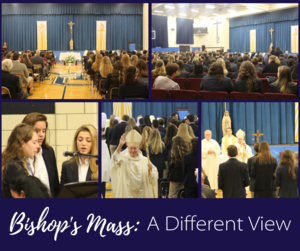 Bishop Arthur Serratelli, as well as several other priests and bishops, joined the Morris Catholic students and staff in a celebration of Mass on Thursday, October 4. Parents were also invited to join. As a Protestant Christian, the Bishop’s Mass, or any Mass for that matter, is a reasonably different experience for me than most Christian church services I attend. However, the Catholic Mass is not unlike a traditional Protestant church service, either. In this particular Bishop’s Mass, the choir sang “Canticle of the Sun”; for one thing, this composition, and most others, that are sung at the Catholic Mass have largely different content, genre, and tempo from the usual songs that the congregation at my church sings. In addition, I noted during the Bishop’s Mass that the choir leads the student body in song, but is generally the main voice singing, and usually sings for everyone else and myself to listen to and reflect on. On the other hand, in most Protestant churches, a few music leaders, often playing instruments, lead hundreds of people in the congregation in praising God. During the Mass, every student walks to the front, and receives the Eucharist; unlike the seemingly vast majority of students who take communion, I cross my arms over my chest as I near Father Carmen, Mr. Loia, or whoever is administering the host. Even so, I am always happy to receive a calming, all-inclusive blessing. In Protestant churches, communion is generally only celebrated once a month; in Catholic Masses, the Eucharist is received at every Mass.

Though notable differences can be readily identified between these types of regular celebrations, I can also easily spot common ground between a Catholic Bishop’s Mass and a Protestant Church service. In both types of services, the same fundamental truth is the constant, underlying message: that Jesus Christ was crucified and rose again to save us from the effects of sin. In the Bishop’s Mass, I listened to the singing of others, listened to a homily, or “sermon” as I typically call it, stood up to engage in one purpose, or sat down for another, and listened to the reading of Scripture. All of these elements of this Mass were quite similar to things I would do in a typical church service. In conclusion, through the Catholic Mass, I see the variety of methods of worship that can be used in a liturgical celebration that I would not have otherwise seen.